Queen Of The West
This is most probably the very first home-made armoured car to be used by the Irish army. This car differs greatly from the Lancia armoured cars in that it was built by a mechanic in his own private garage, a truly "home made" armoured car. 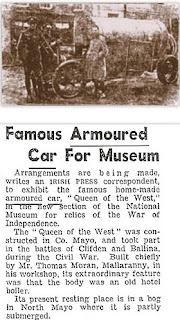 The only known picture of The Queen Of The West

This vehicle was constructed by Tom Moran Mulranny for the Irregulars during the Civil War. It is reported to have taken part in the fighting in Balina and Clifden but was captured by the army who named it "The Girl I Left Behind". Mr. Moran Mulranny took a boiler from a hotel heating system and fitted it to a Lancia chassis however, it proved to be too heavy for the small engine and so this was removed and replaced by an engine from a Crossley Truck


Panhard Test Vehicles
In the early eighties the army was planning to replace the CS 60mm mortars due to their age and the fact that ammunition supplies would not be available for much longer. A replacement program saw some of the older AMLs fitted out with different turrets and weapons in France which were then brought to Ireland for test firing.

This was a test firing that I had pleasure in witnessing way back in the eighties. An Irish AML 60 was sent to France to have an experimental turret fitted sporting the Hughes M242 Chain Gun. This was a very unusual sight as the turret was very high and bulbous due to the size of the gun, it's feed system and ammunition storage space. 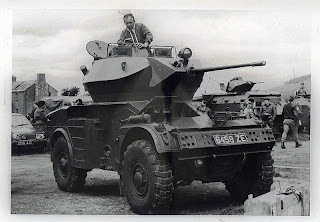 The rounds were 25 x 137 mm and the gun had a rate of fire of 625 rounds per minute. It was unusual in that the the reloading was carried out by an electric motor. Non of the gases built up by firing were used in the reloading and therefore the full force of the the gas was behind the round giving it maximum power and velocity. This weapon never entered service with the Irish army. 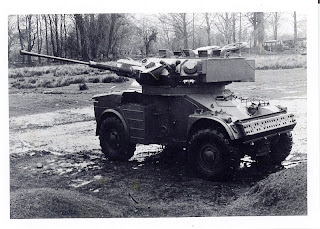 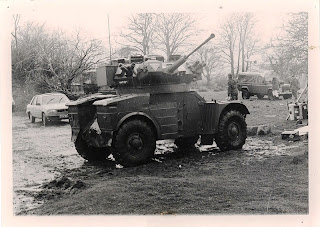 This weapon never entered service with the Irish army.


Panhard VBL 4x4 Patrol Vehicle
The VBL (Véhicule Blindé Léger (Light Armoured Vehicle)) was built by Panhard for the French army but has been exported to many countries. Panhard sent one vehicle to Ireland for trials in the late eighties but it was never selected. Apparently this vehicles rolled over in the Glen of Imaal while being put through it's paces by a Panhard test driver. 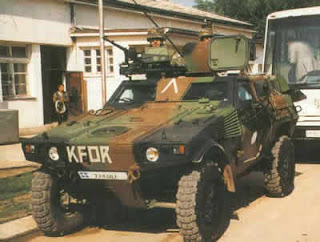 Panhard VBL of the Greek army in Kosovo

The VBL was available in many variants including with turret for a 12.7 browning HB heavy machine gun. The version tested by the Irish army was a standard model with no attachments or turret. This vehicle never entered service with the Irish army. 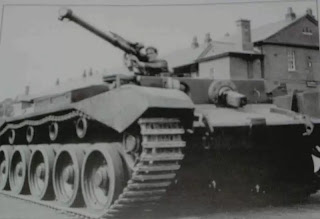 In effect this was an All Terain, Self-Propelled, Recoilless Anti-Tank Weapon. This converted Comet tank never entered service with the Irish army however the hull went on to be used for driver training and as an instructional base vehicle for mechanics and fitters.