Vickers Mk D Light Tank
The Vickers Mk. D was a one-off design built exclusively for the Irish Free State and delivered in 1929. It was developed from the Vickers Medium Mark II tank but had a more powerful, water cooled, rear mounted, 6-cylinder Sunbeam Amazon petrol engine, developing 170 bhp at 2100 rpm and a 6 pdr gun was fitted.

As many as four Vickers .303 machine guns could be fitted. When the tank was scrapped in 1940 the 6 pounder gun was removed and used as an anti-tank weapon.

Landsverk L60 Light Tank
The first Irish Landsverk L60 light tank was delivered to the 2nd Armoured Squadron based at the Curragh camm Co. Kildare in 1935 and joined Ireland's only other tank the Vickers Mk. D. The second Landsverk L60 arrived in 1936. They were both armed with a Madsen 20 mm cannon and a Madsen .303 Machine Guns. 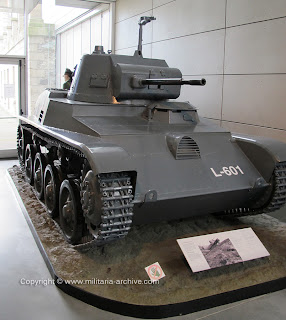 The Landsverk's were still in use up until the late 1960s. One L60 is preserved in running order by the Army and the other is in the National Museum of Ireland, Collins Barracks, Dublin.

Churchill Heavy Tank
The Irish Army took delivery of three Churchill Mk VI tanks in 1948 and a fourth in 1949. They were rented from the British War Office until 1954, when they were purchased outright. This purchase was despite the fact that the supply and transport corps workshops, who maintained them, had reported that spares had all but run out. Experiments were carried out involving replacing the existing Bedford engine with a Rolls Royce Merlin engine salvaged from an Irish Air Corps Seafire aircraft. The experiment was not a success, although the reasons are not recorded. By 1967 only one Churchill remained serviceable, and by 1969 all were retired. The Churchill Mk VI was armed with an Ordnance QF 75 mm gun and 2 Besa 7.92mm machine guns. 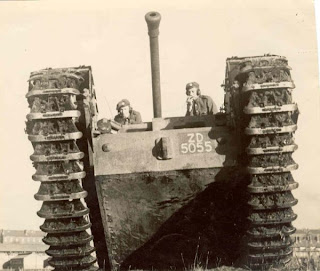 One Churchill tank was abandoned in the Glen of Imaal in the 1970's and lay in the open for a long time before army engineers dug a hole and pushed it in and buried it. A few years later it was recovered and brought to a museum in Northern Ireland.

Universal Carrier
26 Universal Carriers Mk I were purchased in 1940. 100 Universal Carriers Mk II were delivered in 1943 and another 100 Mk IIs in 1945. The vehicles were referred to 'Bren Carriers' by Irish troops. The first 26 Bren Carriers were grouped together to form the Carrier Squadron of the Cavalry Corps. The Carrier Squadron was disbanded in 1943 and its carriers distributed amongst the army's infantry battalions. All 200 of the Bren Carriers Mk IIs were used by the infantry battalions mainly for transporting its 3-inch and Brandt 81mm mortars, ammo and crew. Later 2 Mk IIs were fitted with flame throwers for use by the Corps of Engineers. A number were used in the late 1940s to tow 6 pdr anti-tank guns and 4 were used by the Cavalry School. 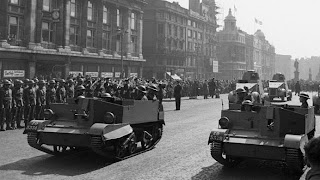 
Leyland Comet Cruiser Tank
The Comet cruiser tank was designed in 1943 to serve as an ant-tank weapon alongside the lighter Crusader tanks. The Crusader was 27.6 tons while the Comet weighed in at 32.7 tons. Leyland Motors Limited began production in September 1944 using Rolls Royce Meteor V12 (600 HP) petrol engines which gave a maximum speed of 33 MPH but at a staggering cost of 1 gallon per mile. By the time production ceased, 1,186 Comets had been built. The first units went into service with the British army in December of that year seeing action in the closing battles of WWII and also serving in the Korean War.

In 1958 the British army began phasing out the Comet in favour of the much heavier and more powerful Centurion Main Battle Tank which although began production in 1945 was much more suited to the battles predicted for the Cold War and was easier to upgrade than the Comet (4,423 Centurions were produced in many variants). The Centurion also used the Rolls Royce Meteor engine but this version produced 650 HP. 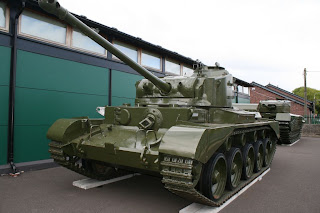 In 1959 the British army offered the Comet tanks for sale and the Irish army purchased 4 of them at a good price. These proved to be very good value and were liked by the crews and in 1960 the army purchased a further 4 Comets. However, the army, in it's rush to purchase these bargain basement tanks failed to purchase enough spare parts either then or in later years until it was too late to discover that the British army has disposed of all it's stocks of spare parts and that production of new parts had ceased.

The main armament of the Comet was a 77 mm High Velocity ant-tank gun and 2 Besa 7.92mm machine guns. The last Comet range practices took place in 1973 and the tanks were soon withdrawn from service. One Comet has been completely restored to running order and is used in stand-down parades and for static display on the annual Cavalry Day in the Curragh Camp. Another Comet was on static display for many years in Connolly barracks, Longford and was moved by a private contractor to it's new location in Custume barracks Athlone when Connolly barracks closed down.